You may have heard (since Anderson Cooper recently reported on this story) that an assistant attorney general for the state of Michigan, Andrew Shirvell, has undertaken a personal campaign to defame and harass the Michigan Student Assembly’s current president, openly gay student Chris Armstrong.

If you haven’t heard about this yet, a simple Google News search turns up plenty of articles.  Many of these were written after Anderson Cooper talked with Shirvell on Cooper’s show AC360°.

As I read about this, I recalled something from a news story I photographed several months ago.

In May 2010, local theatre company Ann Arbor Civic Theatre staged a production of The Laramie Project.  A group from the (in)famous Westboro Baptist Church, well-known for its anti-homosexual agenda, travels the country to picket outside productions of this play, and they planned to picket the A2CT show in May.  Ultimately, they didn’t show up, but a crowd of about 100 people did show up to counter-protest and spread their message of love.

Then-newly-elected MSA President Chris Armstrong was to appear at the counter-protest, and unlike the WBC he did show up to speak to the crowd. 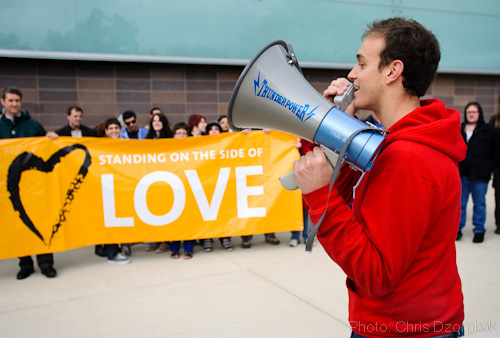 While I was there, I noticed some guy who didn’t seem to fit with the rest of the crowd.  He seemed to have a personal agenda of hating Chris Armstrong for no particular reason.

So when I watched the story on CNN, I thought to myself, “Hmm…could that be the same guy?” 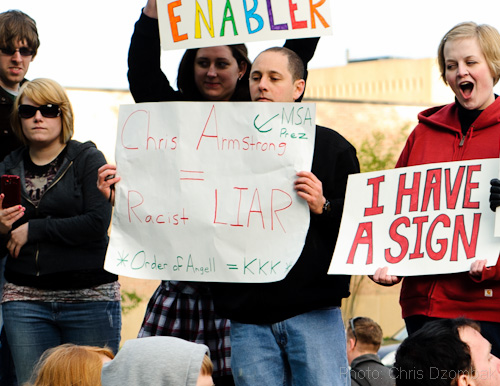 As it turns out, it is the same guy.  Assistant Attorney General for the state of Michigan, Andrew Shirvell, made the trip from Lansing to Ann Arbor on a Saturday afternoon to hold this sign stating that the University of Michigan Student Assembly president, Chris Armstrong, is a racist and a liar.  Yes, Michigan citizens, your tax dollars pay this guy’s salary (thanks to Attorney General Mike Cox, who as of this writing has spoken against Shirvell’s actions but refused to fire him).

Here are a few more photos I had originally published from the counter-protest showing Chris Armstrong and Andrew Shirvell in the same photo: 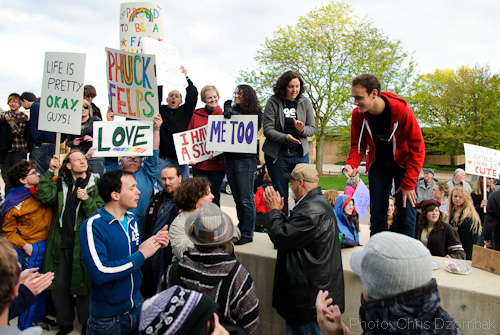 And one last photo of Shirvell, standing against the crowd:

The folks at PrideSource noticed and reported on Shirvell at this protest back in May.

All my published photos from this counterprotest are viewable on Flickr and available on Demotix.