A version of this essay appeared on Quartz.

I’ve decided to get rid of my Apple Watch Sport, which I preordered and received just a few weeks after Watches started shipping. I haven’t felt compelled to wear it or use it frequently, much less daily, over the past few months. I want to take a moment and discuss why I haven’t been using mine and how future smart watches—from Apple or others—could be better.

I’ve collected a number of “real”, non-smart, watches and the Apple Watch’s design simply doesn’t stand up against any of them. I’ve supplemented my Watch with third-party bands from Monowear Design and Nomad—both of which I would recommend to any Watch owner—but still the Watch itself just doesn’t look like something I want on my wrist every day. 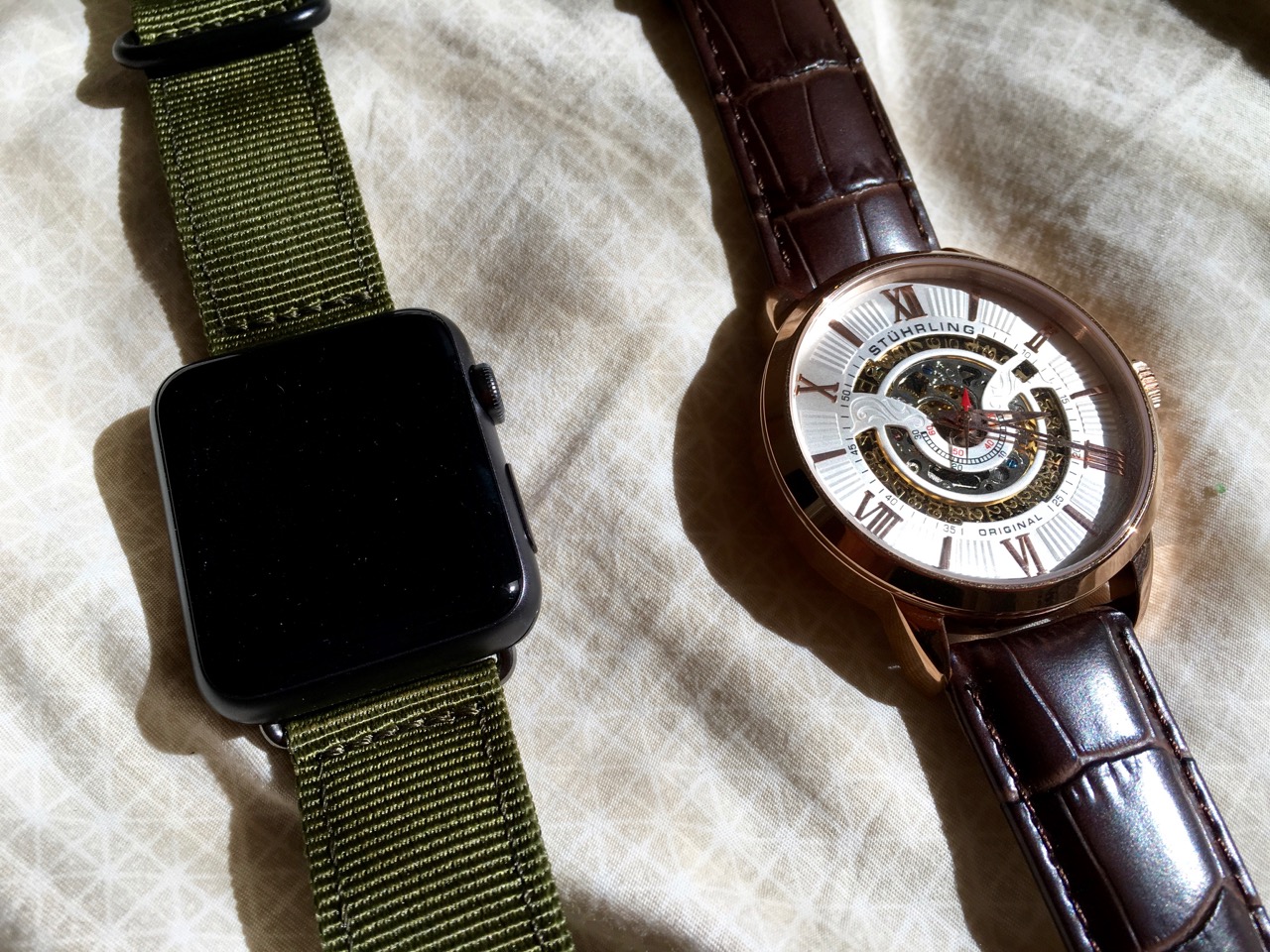 These are two of my watches; the Stuhrling is priced at less than half of the Apple Watch’s price point. The Apple Watch is paired with an olive nylon strap from Monowear, but Apple’s design doesn’t stack up.

And I’d like to draw attention to the “empty” part of that critique. The need to make a concerted, obvious gesture to check the time on any watch is absurd. I can subtly glance at any other watch. The Apple Watch is pretty good at detecting its “glance” gesture, but the need to make any gesture is unacceptable to me.

As a smart watch, I find the Apple Watch more annoying than useful. The user interface is complex and often confusing even though I conceptually understand it; it’s designed with completely the wrong hierarchy in mind.

Even on watchOS 2, apps and more importantly Glances are so slow to update that they’re effectively useless. A Glance just isn’t useful if it takes seconds to update after I bring it up on screen, and all third-party glances I’ve tried are still this slow.

Fitness tracking on the Watch is not something I care about. I like wearing different watches depending on the day, so I was never going to form activity habits based on wearing the Apple Watch daily. Plus, even for days when I wore the Watch, I wasn’t sure what to do with the data it collected. (It’s the same reason I’ve decided not to get a Fitbit: it’s collecting data, sure, but to what end?)

I don’t feel compelled to use my Apple Watch, and it doesn’t make sense for me to keep an expensive, unused bit of hardware around while it still has market value.

Before concluding, I want to call out the Pebble Time Round. On paper, it seems to resolve many of the issues I’ve noted above: the 20mm “Silver with Nubuck Brown Leather” model looks much more my style, and its always-on display should allow subtly telling the time and make it more socially acceptable to screen notifications. I may well preorder one to try out after selling my Apple Watch.

And maybe Apple will make some staggering improvements with its next Watch iteration. Time will tell.