The vast majority of people who want to track aircraft with ADS-B and cheap SDR will do with a dedicated Raspberry Pi and FlightAware’s PiAware software. I already have a Mac Mini running 24/7 at home, close to a window, and so I wanted to run my monitoring directly on OS X.

This post documents the process I went through to get this working, on OS X 10.11.6. The process — particularly the networking and emulation steps — may be different on other macOS versions. This turned out to be a bigger challenge than I anticipated; it took the better part of a Saturday. Tracking aircraft on OS X is easy enough, but reporting positions to FlightAware direct from OS X is not. Before you go down this path, I recommend skimming the entire post.

This post assumes you have some high-level familiarity with ADS-B and MLAT, and you have the capability to work on the terminal with OS X and Linux.

I have an RTL-SDR already, but I use it for various projects and I didn’t want to dedicate it to this application forever. I chose to buy a FlightAware Pro Stick Plus, which includes a purpose-built 1090MHz band-pass filter.

Find the lat/lon and elevation of your antenna

If you find your house on Google Maps, right-click, and select “What’s Here?” you can copy the exact latitude and longitude of your home.

Then, to find the exact elevation above sea level of my antenna, I used this app. I set my phone at the base of the antenna and waited a few minutes until the altitude number had settled to a steady state.

Keep this information handy throughout the process; you’ll need it several times.

This process requires the Homebrew package manager for OS X.

dump1090 is the core software in this setup; it receives radio data from the SDR and decodes ADS-B messages. I chose to use mutability’s dump1090 fork, which includes a number of feature improvements and bugfixes (the original dump1090 is somewhat out of date), plus a better web UI: 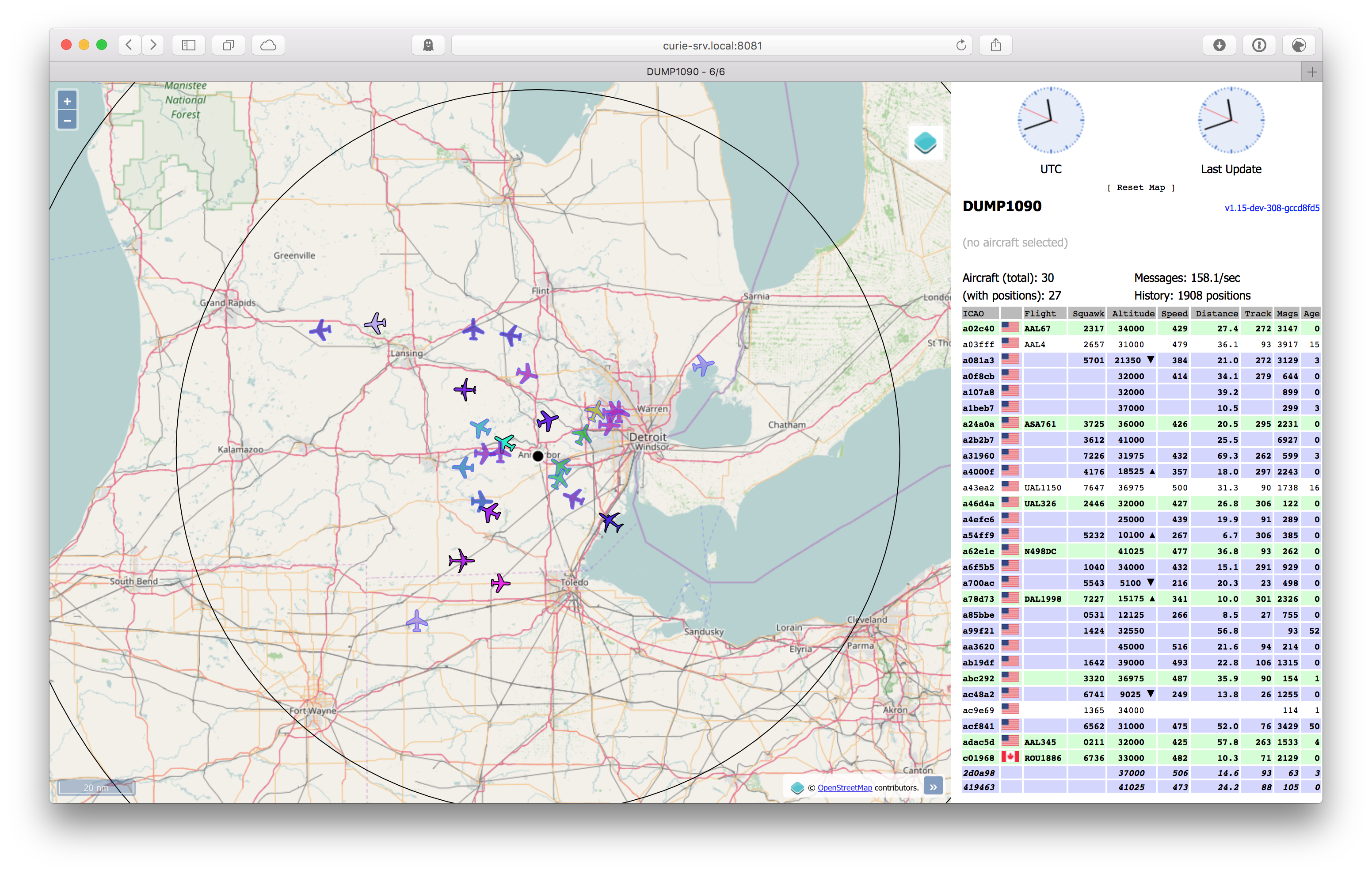 dump1090 used to have a web server built in, but it now requires an external server. I chose nginx, since I’m already familiar with it.

Verify that you see the dump1090 web UI when visiting localhost:8081 (from the host Mac), or MAC-HOSTNAME.local:8081 from elsewhere.

The Plane Finder feeder should start automatically on login.

Once you receive an email from Plane Finder, register for a sharing account. That welcome email will have some additional useful information.

The Plane Finder feeder will give you a nice real-time status display on the local network: 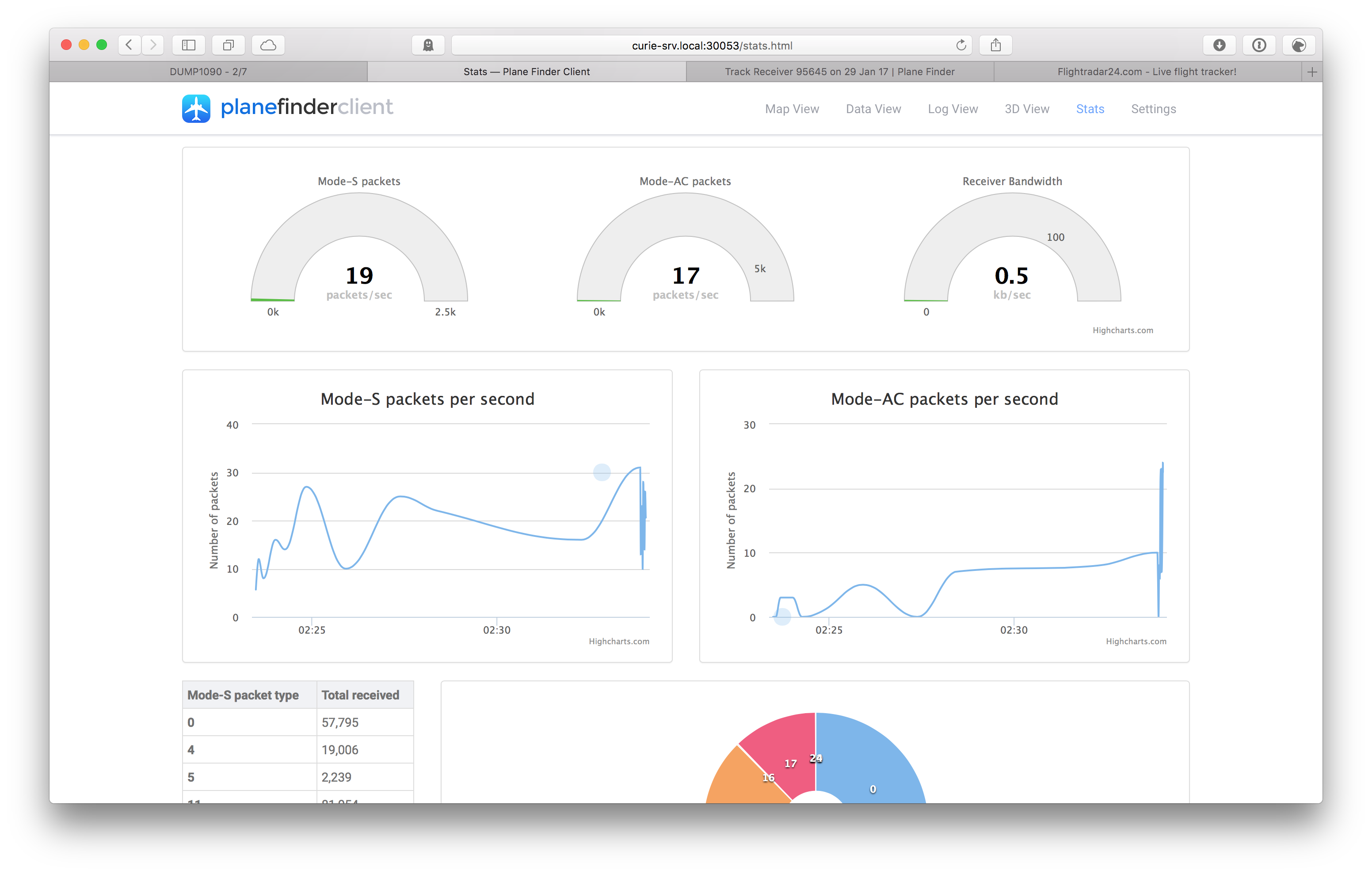 FR24 seemingly doesn’t have a good reputation in the community, but it’s possible to feed it via this setup:

Once you receive an email from FlightRadar24, you can use the signup page for those who share ADS-B to get a free Business account. That email will have some other useful information as well.

Feeding FlightAware is noteworthy because they will give you MLAT results, improving your local dump1090 web UI. It’s challenging, though; there is no Mac software available to feed FlightAware. After digging through the code for piaware and the related tools, it became clear that I didn’t have the patience to adapt it to run natively on OS X.

So I decided to run an emulated Raspberry Pi on the Mac. That emulated Pi could run PiAware and talk to the dump1090 instance running on the host Mac. This requires QEMU, so:

Run brew install qemu — at this time, this command resulted in installing QEMU 2.8.0.

After about an hour trying to get QEMU to run Raspbian Jessie Lite, it became clear I didn’t know enough about QEMU to make this work myself.

Now we have a working emulator to use! Next we’re going to set it up so the Pi shows up as its own machine on your local network.

Bridging the Pi VM onto the local network

Open System Preferences → Network. Click the gear icon at the bottom of the network interfaces list, select “Manage Virtual Interfaces…”, add a “New Bridge…”, associate it with your Ethernet connection, and call the bridge bridge1.

(Thanks to bitfunnel.net for publishing these directions, which include a helpful screenshot! Archived here in case it goes away.)

Write the following script to ~/piaware-vm/scripts/tap-up: (update bridge1 if you called your bridge interface differently)

Write the following script to ~/piaware-vm/scripts/tap-down: (update bridge1 if you called your bridge interface differently)

A QEMU window should appear and boot Raspbian! SSH into it: ssh pi@raspberrypi.local (the default password is raspberry).

While editing /etc/hosts, remove the localhost entry for IPv6. This works around a piaware bug; see this discussion for details. After these edits, my hosts file looks like:

Now, to install PiAware on the Raspberry Pi VM, SSH into it and run:

Configure it, substituting the host Mac’s name for MAC-HOSTNAME:

Reboot the emulated Pi (sudo shutdown -r now), wait for it to boot, SSH back in, and confirm that piaware seems to be up and running:

Assuming dump1090 is still running on the host Mac, piaware-status should print:

(The last error is okay; remember, dump1090 is running on the host Mac, not on the emulated Pi itself.)

Claim your new PiAware on FlightAware. FlightAware will then send you an email. On their website, configure your FlightAware profile and the settings for this Pi, particularly the receiver location and elevation. Then restart PiAware, while SSH’d into the Pi: sudo systemctl restart piaware.

FlightAware helpfully let me know that the disk on my Pi was 96% full. I had to do the following — which requires a Linux computer — to resize it:

First, shut down the Pi (sudo shutdown -h now, when SSH’d into the Pi). Wait for it to shut down, and quit QEMU.

Restart QEMU with this new image — remember to point it to the new piaware.img — and use fdisk to update the partition table. SSH into the Pi, and sudo fdisk /dev/sda. I roughly followed this guide to delete and recreate the partition, as follows:

Then run sudo shutdown -r now on the Pi, wait for the Pi to shut down, and quit QEMU. The next step is to fsck and resize the filesystem on that partition.

To do this, I copied piaware.img to a Linux laptop. (At this point, I began reconsidering some of my life choices.) On the Linux laptop, I set up a loop device to let me work with the partition I wanted to resize, then I checked and resized the filesystem:

Use sudo losetup -d /dev/loop1 to delete the loop device. Finally, copy piaware.img back to the host Mac; try running it via QEMU again and verify that df -h reports a healthy amount of free space on the Pi:

[ADS-B Exchange] is the “world’s largest co-op of unfiltered flight data.” Its feeding instructions are also Pi-oriented, so I opted to install the feeder on my emulated Pi. Like FlightAware, ADS-B Exchange will feed MLAT results back to you.

⚠️ Note that the setup script wants your antenna elevation in meters. I’ve submitted a pull request to clarify that.

SSH into the Pi, and run:

Configure the resulting scripts (in ~/adsb-exchange/) to work with the dump1090 client on the host Mac, as follows:

Reboot the Pi, and SSH back in and verify those scripts are running:

This forum post makes clear that it’s difficult to see whether ADS-B Exchange is receiving data from you properly. One option is to see if you show up in the MLAT sync matrix, which in my experience took a couple of hours.

You might also see some output from ADS-B Exchange’s MLAT client printed on the console in QEMU, which would verify you’re up and running: 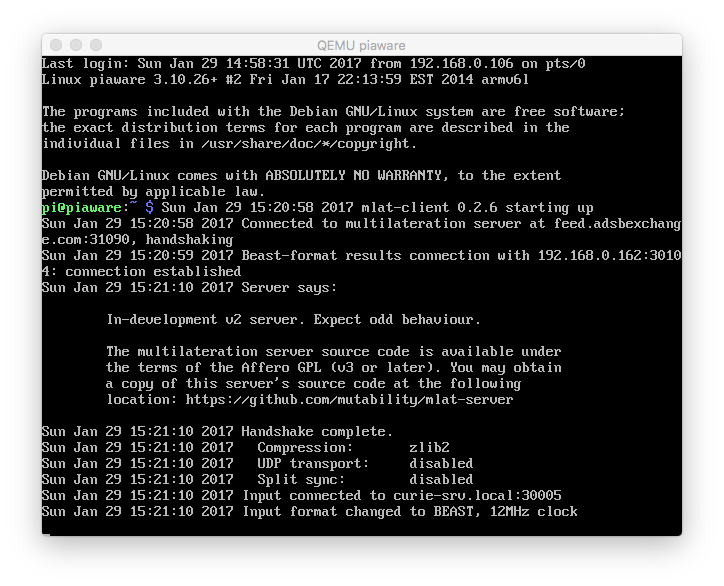 At this point, we’ve already configured the Plane Finder feeder (and FR24, if you opted to install it) to start on login. And we know the PiAware and ADS-B Exchange tools will start when the Raspberry Pi emulator boots. So we just need to make the emulator and dump1090 start at login.

Create one more directory, ~/scripts, to store startup scripts for those tools.

To allow running QEMU with sudo (necessary for the networking configuration) without typing a password, we need to tweak the sudoers file. Run sudo visudo and add this line at the very end:

This will allow anyone to run the QEMU ARM emulator on that system, with sudo, without a password.

Download these two plists and adjust the paths they reference to include your OS X username (instead of mine, cdzombak). Move them to ~/Library/LaunchAgents.

cdz.dump1090.plist will launch dump1090 on login and restart it if it crashes. cdz.piaware.plist does the same for the PiAware VM.

Load the plists (incidentally, this is a useful launchd reference):

Finally, I have a nice dump1090 installation on my always-on Mac; I’m feeding reports to FlightAware, ADS-B Exchange, and Plane Finder; and the first two of those are feeding MLAT results back to me.

You can see some statistics for this receiver on…

You’ll notice that my reception distances are embarrassing. The ADS-B antenna is currently mounted in a west-facing window. I’m currently renting this apartment, so I’m not sure I can mount something more permanent on the roof. My main interest right now is monitoring interesting aircraft around Michigan Stadium (just a little to my west) during events there, though, so this should be fine.

As always, I welcome discussion and feedback; I’m @cdzombak on Twitter.